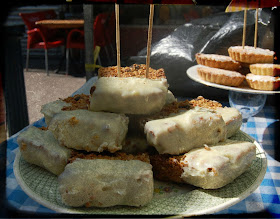 My mum has always made flapjack and from an early age I developed a snobbery against sickly sweet shop-bought flapjack. Mum puts sultanas in hers which is what I usually do as they are cheap ands easy to get hold of. However recently I've taken to packing my flapjack full of nuts and other dried fruit.

When pondering what I could send to my Foodie Pen Pal which would survive the journey, I decided to experiment with yoghurt dipped flapjack. A bit of googling told me that 'yoghurt-dipped' flapjack contains a shocking amount of white chocolate - but it tastes great! I made my penpal cranberry and walnut flapjack, the remains of which went down so well (or quickly) with my boyfriend that I made a hazelnut and sultana version to sell at a market last weekend.

The great thing about flapjack is that you can adapt it to suit what's in your cupboards, just chuck in whatever dried fruit, nuts or seeds you happen to have. The below recipe is my mum's which I adapted for these cranberry and walnut bars of oaty goodness! For me the key to a good flapjack is brown sugar and the addition of an egg which many recipes don't include but I find that it binds the oats well and still creates the perfect amount of 'chewiness'. For an extra treat dip in or drizzle with the yoghurt mixture - it goes perfectly with the cranberries but the flapjack is still delicious without it!

- Preheat oven to 160C and line a baking tin
- Melt the butter in a saucepan over a low heat
- Add the sugar and golden syrup to the melted butter and stir until the sugar has dissolved.
- Remove from the heat and stir in the oats
- Once the oats are completely covered in the mixture, add the egg and mix well.
- Add dried fruit and nuts and pour into the baking tin.
- Bake for 20-30 minutes, until golden brown on top.
- Remove from the oven and allow to cool in the tin before cutting and eating :) 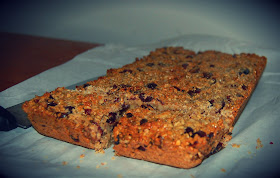 - Melt the chocolate in a heatproof bowl above a pan of simmering water. (Be careful not to let the bowl touch the water)
- Remove the bowl and allow to cool slightly
- Mix in the yoghurt and leave the mixture to cool. 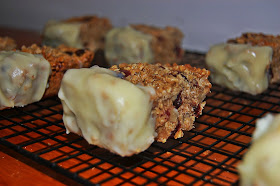 I'm entering this into the Flapjack Challenge being hosted by Homemade by Fleur. Check out Fleur's blog including some fabulous recipes here. 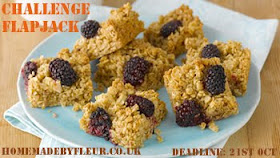